If I asked you to describe Encelia farinosa anatomy, where would you start? [Waiting for a response…] Ah! Compound flowers you say? That’s indeed a good starting point. So, what is a compound flower and what is the opposite of a compound flower?

A compound or composite flower (aka pseudanthium) looks like a simple flower, but is comprised of a cluster of flowers (known as florets). These florets group together to form a single flower-like structure. Think of sunflowers and daisies. Like Encelia farinosa, they belong to the family Asteraceae.

One of the distinguishing characteristics of Asteraceae is the capitulum. The capitulum, or flower head, includes ray florets (outside) and disc florets (inside). Accordingly, the outer “petals” are actually individual flowers (ray flowers) containing their own stamens and/or pistils. Though, in the case of Encelia farinosa, the ray florets are…sterile. And the center of the compound flower is a cluster of disc flowers, each of which produce their own seeds. Depending on the compound flower, you could have hundreds or even thousands of individual flowers! (That’s from Wikipedia, I can’t think of a compound flower with thousands of individual flowers…maybe certain sunflowers?!) 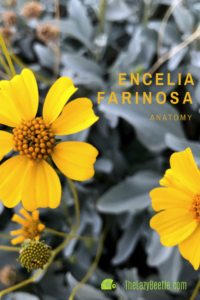 As you can see, understanding flower anatomy is a huge part of flower design construction. Even if our design looks modern and somewhat abstract, we strive for botanical accuracy. The Encelia farinosa design saw many, many revisions. From defining the spiral of the disk florets to the number of stages depicted in the design. But that’s for another article… 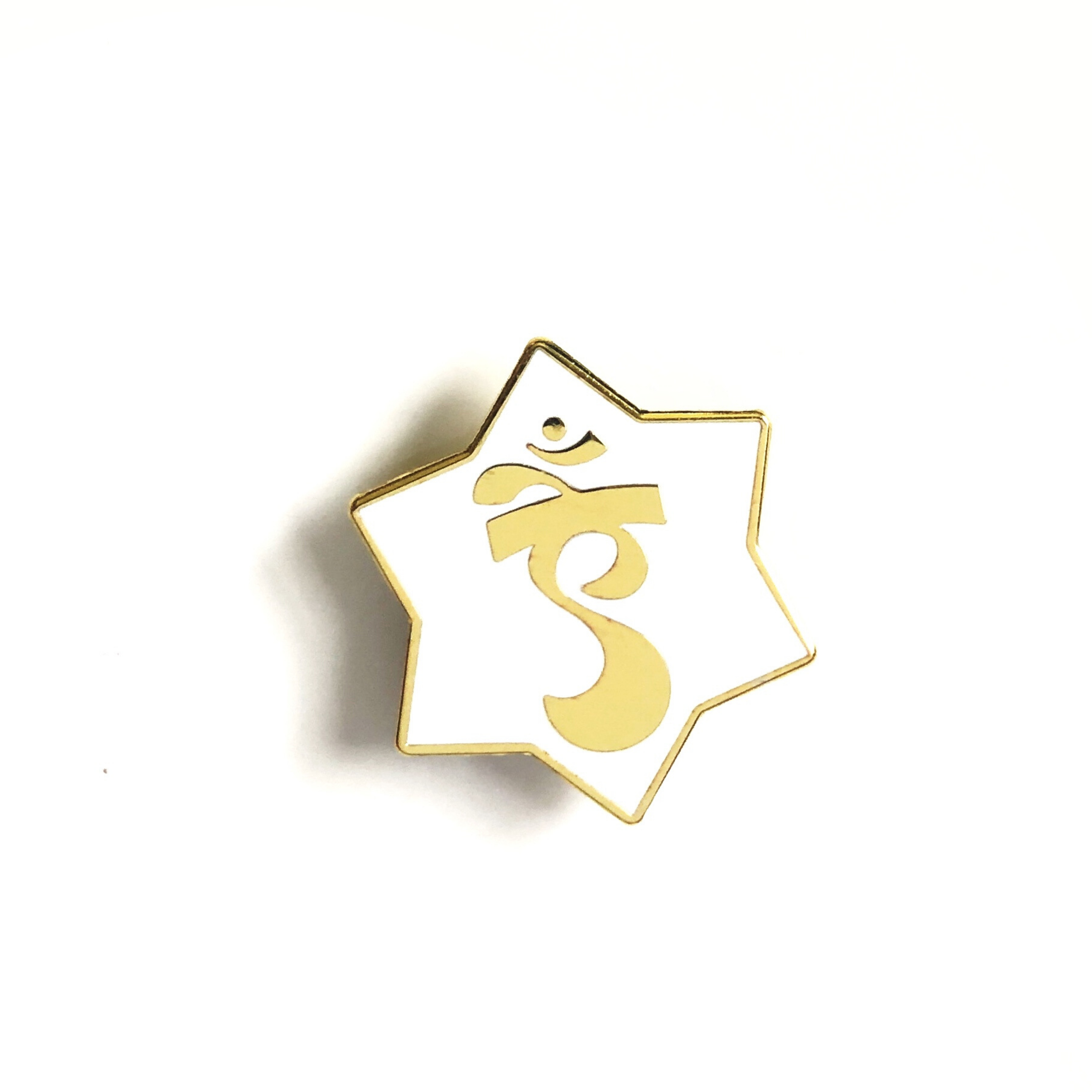 Available in our Etsy shop with either a magnetic or butterfly clutch back.

Months before the first semester of law school started, I stayed in Fresno, California with my mom and brother. The neighborhood was generally very quiet. But one day, I distinctly heard meowing nearby. It wasn’t our cat, I thought to myself. So I didn’t pay much heed, but hours later, I couldn’t stand it anymore. From my mom’s bedroom window, I looked down into our next door neighbor’s backyard, and sure enough, a kitten sat in front of their sliding patio door…in the cold. What?!

I walked to our backyard toward the fence that separated us from our neighbor and called to the kitty. Of course, he came to the fence right away! He was so eager and desperate for contact. Being the cat lover that I am, I couldn’t help but want to “help” the adorable kitten before me. So I dug a tiny hole in the ground under the fence… Somehow, he knew what I was doing and as soon as the hole was large enough (which wasn’t that large considering he was tiny), he crawled through. Oh the delight that ensued! Such a playful and smart kitten. I think I spent the afternoon just playing with him. Then I worried about what the neighbors might do if they found him missing. With a heavy heart, I picked up the little kitten, put him back under the fence, and filled up the hole.

This just made it worse as he continued meowing his lament, as if directed at me this time. The kitten had hutzpah, for he meowed what seemed like the entire rest of the day. The next day, I did the same thing. Dug the hole under the fence and played with the oh so lonely and cold kitten. This time, I brought him inside. He was so happy. At this point, my mom and brother saw the kitten and understood the situation. We were all abhorred that our neighbors (whom we didn’t know) would leave a kitten out in the cold without any shelter. But it wasn’t our business. So, at the end of the day, the little kitten went back under the fence where he continued to cry.

Then something surprising happened the next day. The kitten learned to dig, and let himself into our backyard. Imagine my surprise (and delight) when I found him in our backyard, not crying. This went on for a few days. One day, my mom had friends over. She called me into the living room because the kitten was stuck to the screen door—literally, clinging to the screen door about 3 feet off the ground. lol. He was trying to get in the house, but the screen was in the way! A few days later, the neighbors figured out what was happening, I think, and tied the kitten to a post in their backyard. Well, that backfired on them because he wound himself around the post to the point where he could barely move. So, they removed the tether. And, once again, he found his way to our house.

It’s amazing how his presence became the norm. So much so that we worried about him before leaving town for a few days. I don’t know what happened during those days; whether this little cat spent the afternoons in our backyard only to return home for food. But upon our return home, there he was, waiting for us on one of the outdoor chairs, cool as a cucumber.

What happened next changed everything. My mom and I were out shopping. When we drove into the garage, my mom got out of the car and shrieked. The sneaky little cat was waiting for us in the front yard and followed the car into the garage. That was it for my mom. She told my brother to take the kitten to our neighbor’s house and tell them, once and for all, to either take care of their cat or give him to us. A few minutes later, my brother returned, with the kitten, saying he was ours.

And so, that’s how Thomas came to live with us. Actually, he started out as Big-head Tom. Tom because he was grey and white like Tom from Tom & Jerry. But Thomas fit him better. It wasn’t until later when the little boy (the cat was supposed to be his, when he stayed with his father and step-mother) dropped by that we learned Thomas’s original name: Bubba. (If you knew Thomas, you’d know that such a cultured and elegant cat was not to be named Bubba.)

From there, Thomas went on to have many grand adventures…

Brittlebush (Encelia farinosa) is almost as ubiquitous as Creosote in the Colorado/Sonoran Desert. Their silvery leaves are instantly recognizable and, in the spring, fragrant golden yellow flowers emerge filling out the round, bushy plant.

Encelia farinosa was an interesting flower design to conceptualize. First, most people recognize Brittlebush by the shape of the plant and the color of its leaves. But it’s hard to depict on a, say, small logo. Plus, it was a great opportunity to illustrate a compound flower with ray and disc flowers!

The first flower design and the flower that started it all! Not only did we have a ton of pictures and videos of Fagonia laevis, but the more we (er, Geoff) looked at them, a pattern started to emerge. The way that the plant branched out, how flowers emerged from each branch, the number of stamens, the appearance of stipules, etc. And in creating the design, we learned about botany and the anatomy of flowers.

That was the beginning of the Flower Design series…

The Desert Five Spot (Eremalche rotundifolia) is an interesting flower. Besides its distinctive markings, which lends it its common name, when it’s fully opened, it’s shaped like a globe. In that sense, it’s like the Desert Mallow.

Another little desert beauty: Ditaxis lanceolata. If you see a small plant with slender, lanceolate-shaped, hairy leaves, take a closer look. The flower is small and white and almost gets lost nestled in the fuzzy, white hairs. We usually find Ditaxis in the crevice of a rock or leaning next to a rock where it is slightly shaded. Just another beautiful and ephemeral desert flower…

We actually published a post of this picture of Ditaxis lanceolata back in 2016. But a few months ago, we printed this photograph through our fine art printer. Actually, we sent it to the printer a couple of times. The first print turned out way too yellow and dingy. So, we color corrected the image. The entire image is brighter and more accurately reflects the blueish light from the shadows. The second print was better, color-wise, but the paper wasn’t quite right. The third print on archival, cotton-based photography paper did the trick and now this image looks amazing!

Gilias are some of my favorite flowers in the desert. They are so tiny and perfectly formed. I love looking at the blue anthers (what I called “pom-poms” for the longest time). I’m not sure what species of gilia this is, as there are many. I used to think it was the yellow-throated gilia, but I’m pretty sure that’s not correct (even though they do have yellow throats). To determine which gilia it is, one needs to look at the leaves. Unfortunately, I’d have to hunt down those old photos to see if I took an overview shot with leaves… 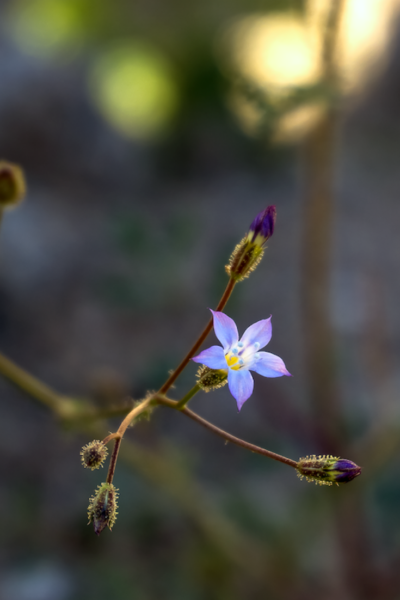 For now, I’m going with either Desert Gilia (Gilia cana), Little Gilia (Gilia minor), or Star Gilia (Gilia stellata), though the color seems off for the last one…

This turned into a gorgeous fine art print!

This was originally published as The Princess and the Bee when we first photographed it. The Ghost Flower (Mohavea confertiflora) mimcs another flower, the Sand Blazing Star, to attract pollinators such as the Xeralictus bee, a native bee. Who needs to produce nectar when you can rely on floral mimicry?

The reason for re-publishing this image has everything to do with printing. The original print looks fine on screen, but was too yellow in print. The little bee was also lost… So Geoff made the decision to crop the image and zoom in on the bee.

This Snapdragon (Antirrhinum filipes) was a rare find! Found by our botanist friend, Colin, along the first loop of the Randall Henderson Trail at the Santa Rosa & San Jacinto Mountains National Monument (that is quite the mouthful…).

A beautiful and dainty flower that grows at the end of the tendril. How crazy is that. While using the macro lens, we bumped the tendril off the branch of White Ratnay, a few times; each time, re-wrapping the tendril oh-so carefully.