…If I were to find a new plant species, that’s what I would name it! Of course, this little beauty (and I do mean little) already has a name: Nemacladus rubescens, more ‘commonly’ known as Desert Nemacladus or Desert Threadplant. The Nemacladus rubescens that we found in Box Canyon (Mecca, CA) was about 2.5″ tall and flowers were approximately 1/16″ wide! Such incredible detail for such a tiny, tiny flower. Notice the glass-like sticks (the pistils?). When you tilt the flower up to sunlight, these little “sticks” reflect the light, like facets of a diamond. Incredible!

These tiny flowers are affectionately called “belly flowers,” because you have to get on your belly to see them!

Nicotiana flower and Ambrosia leaf, too

We’ve been in the desert for a little over a year now, but it wasn’t until today that we saw our first scorpion, and a baby scorpion at that! Actually, by the end of the day, we found three separate baby scorpions! (I use the term “baby” loosely as these little critters are probably “teenagers,” as one volunteer remarked.) 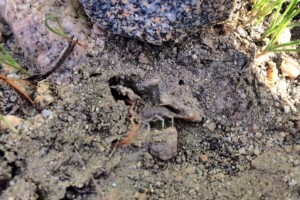 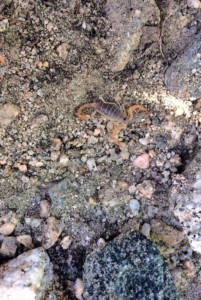 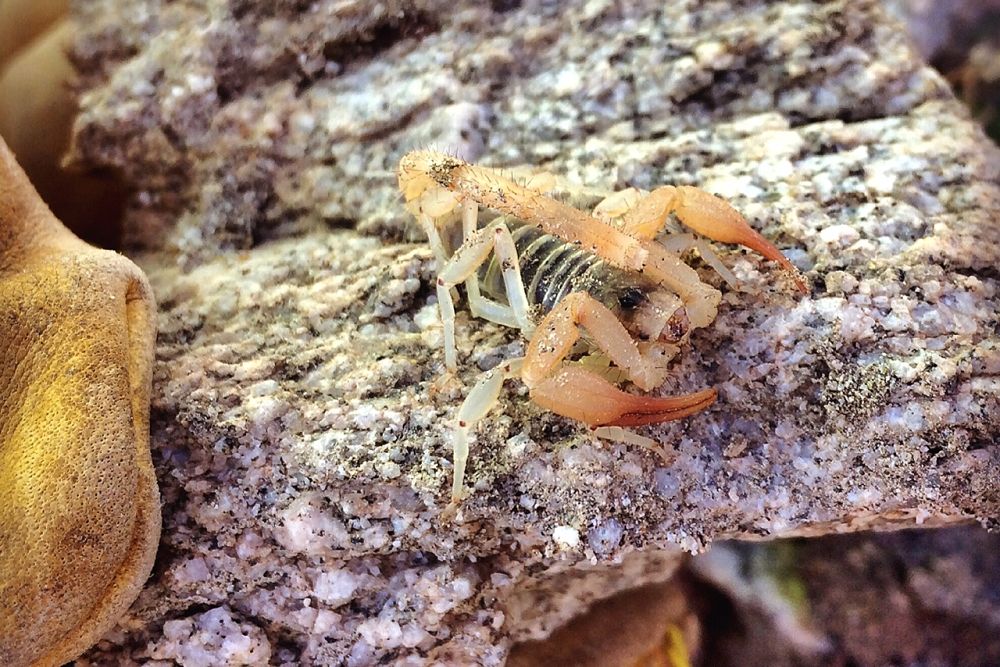 As with most trail maintenance volunteer work, we were moving rocks—lots and lots of rocks. Geoff picked up a rock and lo! There was a baby scorpion! We all stopped what we were doing, of course, to check out the little baby. Since I never volunteer without my phone handy, I snapped some pictures before Geoff tucked the little guy (or girl) back under a rock.

A few minutes later, I picked up a rock and found another little scorpion! Again with the pictures. Further down the trail we found our third one. A quick search revealed that these little guys/girls may be giant desert hairy scorpion (Hadrurus arizonensis) with their little brown hairs. Scorpions usually come out at night to hunt (and mate) so we were pretty excited to have accidentally uncovered them during the day.

Other cool finds include a cluster of Arizona Lupine (Lupinus arizonicus) seedlings, still with their dicot leaves intact. As opposed to other seedlings, the Arizona Lupine seedlings are distinctive due to their color and palmately compound leaves! These lupines are a new personal fave after we discovered that they have a gorgeous scent! The fragrance is similar to that of Hyacinths… Mmmm… 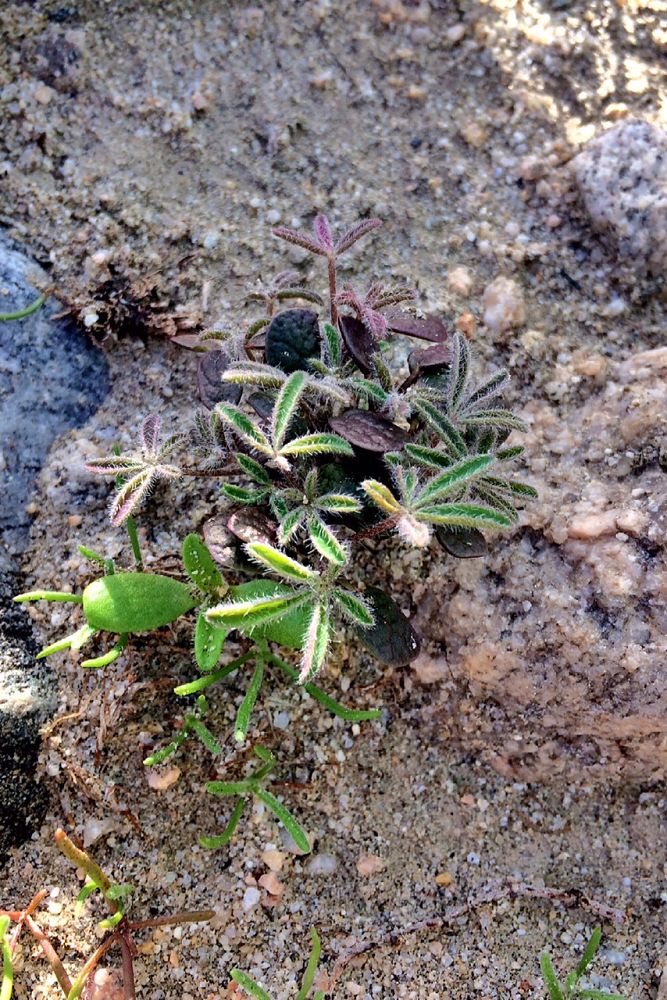 Toward the end of the day, Geoff spotted a plant that we had not seen before. It was a small shrub with whitish-grey holly-like leaves. We joked that it was probably a “desert holly” or “Mojave holly” since many plants in the desert are preceded by Desert or Mojave. I uploaded the photos to the iNaturalist app, and a few hours later, someone identified it as, you guessed it, Desert Holly (Atriplex hymenelytra)! 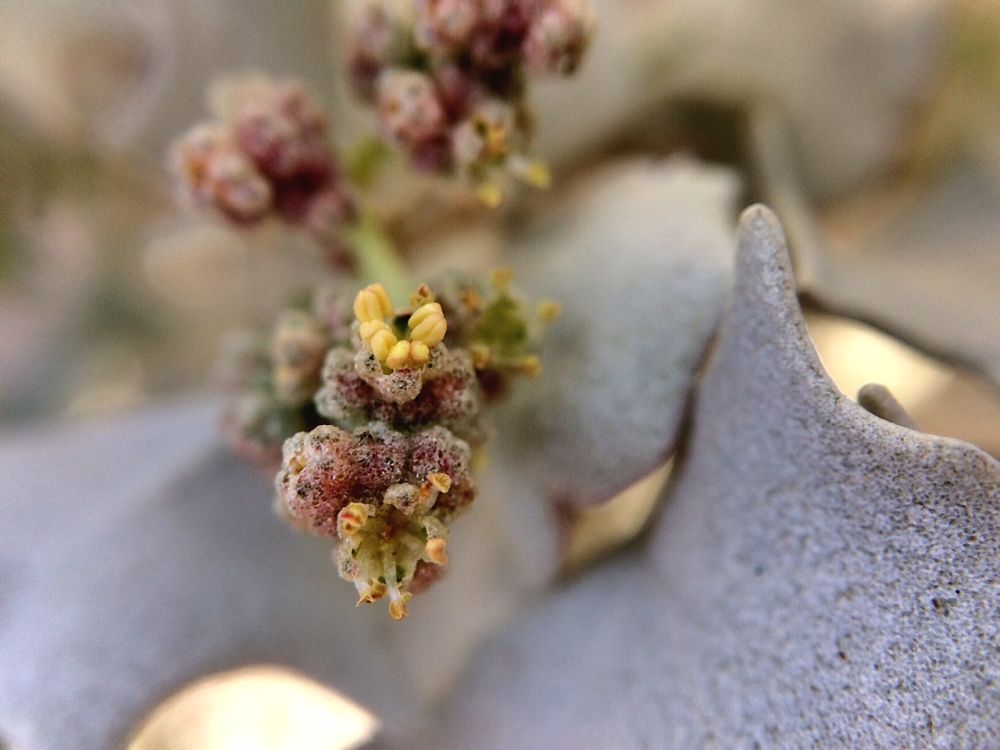 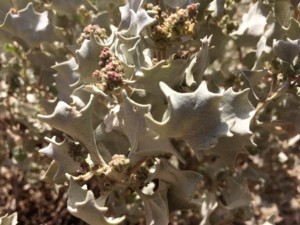 Another mystery succulent in a clandestine undisclosed location….

Need we say more? But for a tantalizing hint, we think it’s in the Dudleya group. Check out the new Jepson eFlora site!

By The Lazy Beetle|2018-08-20T16:49:49-08:00December 5th, 2016|Categories: Botanical Identification|Tags: desert, dudleya, photography, plant identification, succulent, up the hill, wildflowers|Comments Off on Another mystery succulent in a clandestine undisclosed location….
Read More

All joking aside, we’re pretty sure this lovliest of lovlies is from the family Eucrypta, but is it Eucrypta micrantha, or Eucrypta chrysanthemifolia? Hopefully, some avid botanist could help us out with this problem…? The detail below has a leaf in it, maybe helpful, maybe not… oh well…

When we first spotted this little guy (or gal), we thought it was one of the gilias that we’d been seeing. It’s leaves are kinda similar and they are all very tiny with pale purple flowers. They also have little hairs along the stem. The little hairs actually remind us of another tiny plant in Maine known as Sundew (Drosera — a carnivorous plant). Of course, this little lovely is far from carnivorous. 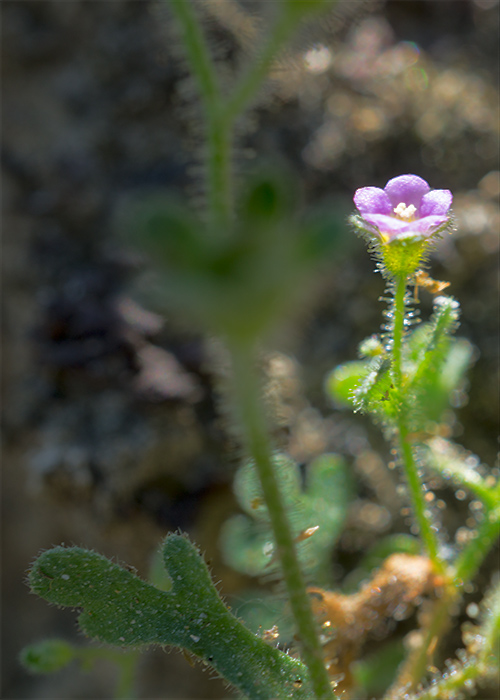 The princess and the bee…

When we found this little bee cozily snoozing in this ghost flower (Mohavea confertiflora), we wondered how it got there. After a while, we posited that the ghost flower and bee may have similar nocturnal/diurnal rhythms. At night, we thought, the bee would go to sleep (in the flower) as the flower closed, and when the sun came up in the morning to warm them both, the flower would open and the bee would start its day. Wonderful.

By The Lazy Beetle|2018-08-20T16:49:50-08:00October 22nd, 2016|Categories: Botanical Identification|Tags: bee, desert, ghost flower, macrophotography, plant identification, up the hill, wildflowers|Comments Off on The princess and the bee…
Read More

And the detail. Obviously this was taken just before sunrise, what a crazy time for light… And the colors of the ‘wand-holdback’, greens, reds, yellows, such a painterly plant. What’s with ‘wand-holdback’ anyway? Story? 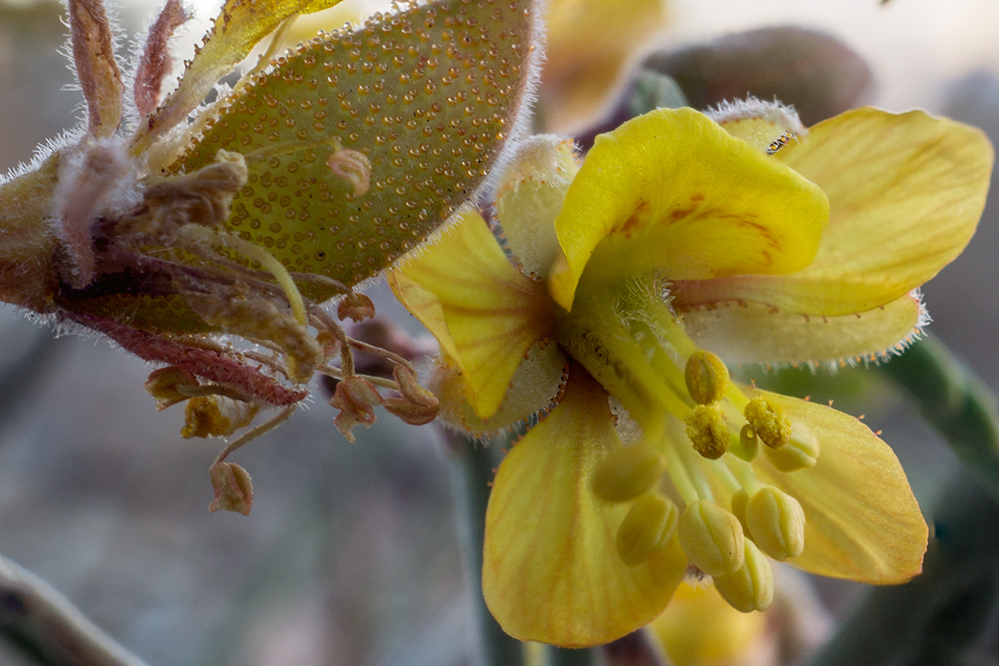 March of the Caesalpinias 008 (the leaf)

And, from The Jepson Desert Manual:

The detail below is pretty spot on. 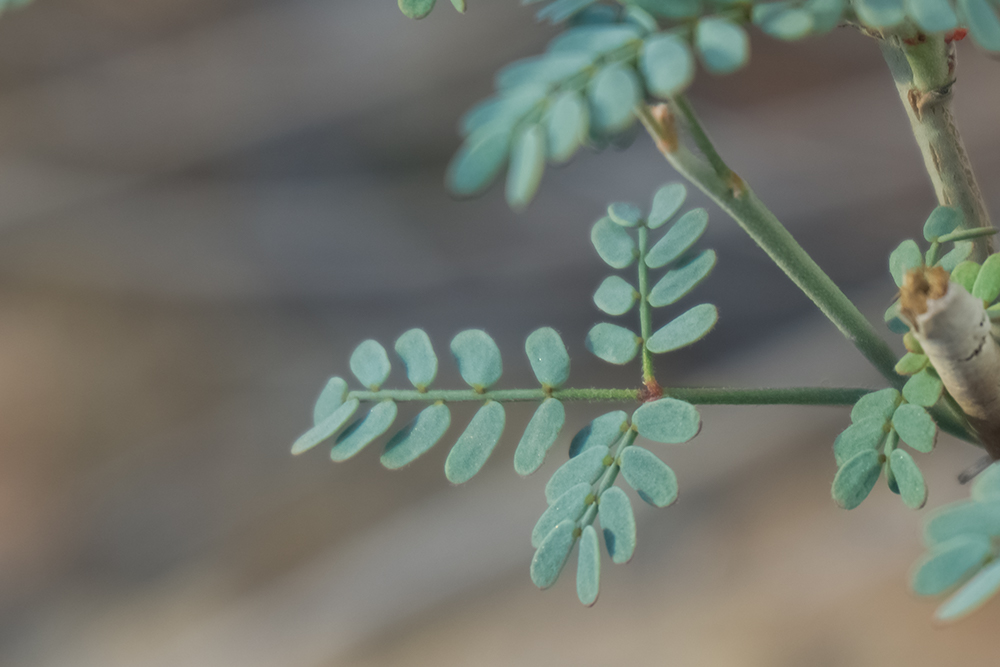