Yā, or या, is the first word in the first three lines of the Saraswatī Vandana.  And it means “who”, it’s an interesting place to start, or continue, as the case may be.

Who is dazzling as a garland of jasmine, white as snow, beautiful without adornment.  Who evokes a golden melody, borne by a pure and bright lotus flower.  Whom all divine beings adore.  Please Flowing One, illumine my darkness.

~ A song of devotion to Saraswatī (author’s translation)

The transcription, transliteration, and translation of the Saraswati vandana (Saraswatī सरस्वती)

yā kundendutuṣārahāradhavalā yā śubhravastrāvṛtā
Who is dazzling as a garland of jasmine, white as snow, beautiful without adornment

And a most fabulous real life print (screen print) of the Saraswati vandana on a t-shirt (from our Etsy shop): 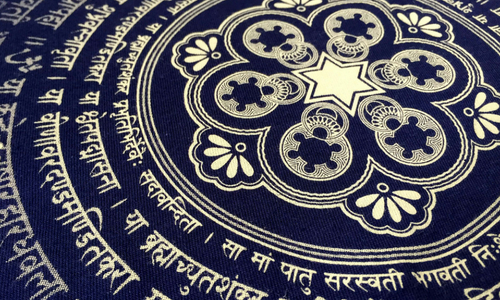 That’s right, capital ‘B’ Breath… Breathe… Breathing… Go on, nourish yourself! You know you want to…

The above Chinese characters are from the 玉皇心印經 (Yùhuáng xīnyìn jīng, Jade Emperor’s Canon of Truth). The meaning is pretty simple. Or, is the meaning to embrace simplicity? Lol…simplicity.

It’s tough to get simpler than breathing is nourishing. And, as per usual, only simpletons are stymied by simplicity. Ponder this…

Je n’ai fait celle-ci plus longue que parce que je n’ai pas eu le loisir de la faire plus courte. (I have made this longer than usual because I have not had time to make it shorter.)

Or, another way of putting it:

So, paired with this illusive simplicity is quite a dizzying bit of back-story. Around the bend there are tigers, dragons, spirits… Oh my! One set of esoteric symbols lead to one another, then back again. This is pertinent for the practices of Karate-do, Taijiquan, and Yoga, which are intentional and useful applications  stemming from Buddhist, Taoist, and Hindu philosophies, respectively.

Just because breathing is simple, doesn’t mean it’s easy.  The quote below really nails why an “open secret” like this, in this case regarding the breath, is an impenetrably secure hiding place for these gems of esoterica.

Like So’ham, this concept is elusive and obscure. And, like so’ham, a small amount of consideration bears many low-hanging fruit for many meditations.

It is difficult to describe my wonder—a concept that is so brief, and at the same time, colossal. I feel this lodestone of respiration, faintly guiding my perception to the barycenter of my firmament. With the breath connecting the polar opposites of ‘self’ and ‘other’.

A great quote concerning the rootedness and contentment arising from these open secrets.

The future is a mystery, the past is history. But right now is a gift, that’s why they call it the present. ~Master U-Gui

Mr. B.K.S. Iyengar, a prolific writer on the subject of yoga and prānāyāma (the control of breath), eloquently defines so’ham and, interestingly enough, why it is not considered a prānāyāma. The following two quotes are wonderfully pithy and enigmatic.

In one edition of Light on Yoga, so’ham is addressed as follows:

…the unconscious repetitive prayer that goes on with every inhalation within every living creature throughout life. 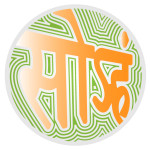 In Light on Pranayama, Iyengar further infers so’ham by examining where it is not.

Pranayama is not just automatic habitual breathing to keep body and soul together.

A very interesting distinction. This wonderful habit all us breathers have is not—repeat, not—prānāyāma… Hmmm…. I can get my head around that. Prānāyāma has the aspect of decision and practice about it. So’ham is more autonomic, like the beating of one’s heart.

The second half of this sentence is what really gets me: to keep body and soul together. So’ham, the glue that keeps the soul in the body. The natural breath, a breath without affectation. I can’t help but think of a Taoist parallel in Chinese medicine, where the two spirits of the liver (魂 hún) and the lung (魄 pò) are kept together during life, and separate when life is not present. This is where so’ham becomes primeval. Where a juggernaut is revealed.